The south coast of England has been heavily fortified since the time of Henry VIII, who had the original castle built to hold off potential invasions by the French and Spanish.  During WWII, the army took it over again to keep the bay safe from the Germans.  The only time it was ever used in a military battle, was during the Civil War, when both the royalist and the rebels wanted it.

The place is quite massive, with a combination modern walls and the round keep from the 16th century.  It is fun to explore.  Inside the keep they have added a sound and action diorama on the gun deck, complete with gunfire and smoke from the canons.

After hiking the entire castle, as well as up and down all the stairwells, we stopped for lunch in the tearoom, which is inside the Barrack Block from 1901.  The food was delicious.  I had wonderful bean soup with a crusty roll, while Bill enjoyed a sausage sandwich.  Both were washed down with a local cider.

It was a beautiful day to be out and about in Cornwall; warm, sunny and not too many tourists.
at February 13, 2014

Two castle built during the same period, but for completely different uses.  Blackness Castle was a military fort on the Forth of Firth, whi... 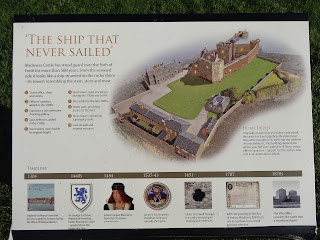 Mary and Bill
Tucson, Arizona, United States
For over 45 years, Bill and I have been living life together. In the past 9 years, we have spent about half of our time house sitting in some beautiful places in the US and Europe. When not house sitting, you will usually find us at home in Tucson, enjoying the beautiful Sonoran Desert. You can never be sure where we might be.